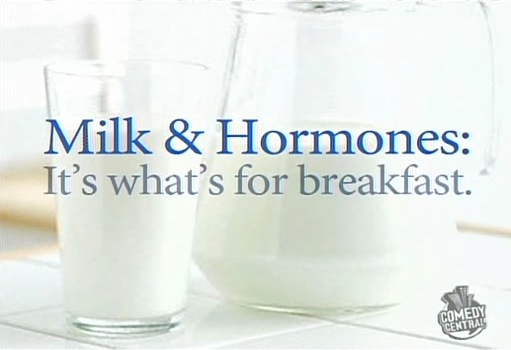 You’ve probably seen it on milk cartons, yogurt containers and cheese packaging if you live in the U.S. — that little asterisk followed by a claim that the milk used in the product does not contain rBST, rBGH or other artificial growth hormones. But a series of studies conducted by researchers at Harvard University has revealed that, despite this claim, many commercial dairy products still contain high levels of growth hormones, particularly the feminizing hormone estrogen.

While most rBST- and rBGH-free dairy products likely do not contain these added hormones, the fact of the matter is that modern dairy production methods, particularly those now used in the U.S., cause more hormones than normal to be present in milk. The reason for this, according to Ganmaa Davaasambuu, a physician and scientist from the Harvard School of Public Health (HSPH), is that many commercial dairy herds are milked excessively as well as during pregnancy, both of which result in higher-than-normal hormone levels in the finished product.

“Thanks to the way it is produced nowadays, milk from a commercial dairy is likely to contain much higher levels of natural sex hormones than you’d find in milk from a traditional (pre-industrial) dairy herd,” writes Josh Harkinson for Mother Jones, citing Davaasambuu’s extensive research into the subject.

Old-fashioned milk did not cause disease like today’s milk

Back in the early 2000s, Davaasambuu and her colleagues decided to investigate why rates of prostate cancer in Japan had escalated nearly 25-fold over the past half-century. This inquiry led the team to the discovery that cancer rates began to spike right around the time that American dairy techniques were brought over to the country following World War II.

After examining roughly 36 years of dietary data in Japan, Davaasambuu and her team came to the conclusion that the American way of raising dairy cattle in the 21st century — commercial herds in the U.S. are typically milked for 10 months out of the year rather than five or six, and are also routinely milked during pregnancy — is the most likely cause of increased cancer rates in Japan. These modern milking methods are not only taxing on cattle, but also produce milk that is highly estrogenic.

This was made more evident after a followup study in Mongolia, where cancer rates are much lower, found that traditional milking methods did not produce these negative outcomes. By milking their cows less frequently and not during pregnancy, the Mongols studied were observed to be largely free of disease.

“The reason that milk produced in America and Japan has more sex hormones than Mongolian milk is simple,” adds Harkinson. “The free-range cows kept by Mongolian nomads get pregnant naturally and are milked for five or six months after they give birth. In Japan and the United States, the typical dairy cow is milked for 10 months a year, which is only possible because she is impregnated by artificial insemination while still secreting milk from her previous pregnancy.”

“Milk from pregnant cows contains far higher hormone levels than milk from nonpregnant ones–five times the estrogen during the first two months of pregnancy, according to one study, and a whopping 33 times as much estrogen as the cow gets closer to term,” he adds.

Sadly, commercial milk products remain a staple in many public school cafeterias, both in the U.S. and Japan. Public schoolchildren in Japan, in fact, are still required, thanks to an antiquated 1954 law, to consume 200 milliliters of commercial milk every day during lunch.

Other studies have shown that chronic consumption of commercial milk can lead to allergies, asthma and other serious health problems besides cancer, which begs the question — why is the government still peddling this processed junk food to our children, while the traditional milk of old, in all of its raw and wholesome glory, remains illegal in many states?

Sources for this article include: