Introduction to the article – We have to begin challenging ourselves and our belief systems at this point in our human history. If we begin to challenge ourselves and our belief systems we will begin to see the patterns of behavior in how we deal with ourselves and others, set in place largely as defense mechanisms. We can begin to see how much of our mind is in ‘the machine’ and how much the machine is affecting humanity and Mother Earth. When we get our mind out of the machine, we can begin to challenge it, and the powers that were, and create something Divine.

Today’s world is a strange place. We are inundated with signals from early on in life, encouraging each of us to walk a particular path, establishing blinders on us along the way to discourage us from looking for alternatives to what the herd is doing or thinking. Life is so complex that overtime, if we are paying attention, we realize that there are an infinite number of possibilities to what the human experience could be, and we come see that the world is on fire because individuals all too infrequently question why things are the way they are, failing to notice that their mindset or behavior needs adjustment in favor of more intelligent, common sensical, or sustainable patterns of existence.

Not meant to be overtly critical of anyone’s lifestyle choices or personal situation, the following 16 signs that you’re a slave to the matrix are meant purely as an observational approach to helping you identify the areas of your life where you may be missing an opportunity to liberate yourself from someone else’s self-destructive design for your life.

If you can relate to any of the items on this list, then the matrix has you, and it is now your duty to engage more deeply in your liberation.

If you’d like to add to or object to anything on this list, then please do so in the comments section below, and be sure to share this with your friends.

Sigmund Fraud is a survivor of modern psychiatry and a dedicated mental activist. He is a staff writer for WakingTimes.com where he indulges in the possibility of a massive shift towards a more psychologically aware future for mankind. 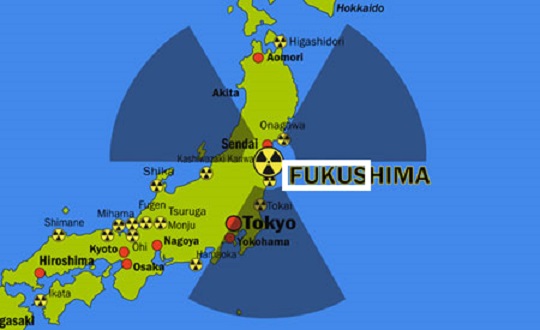 The Tokyo Electric Power Company (TEPCO), which is currently handling cleanup efforts at the stricken Fukushima Daiichi nuclear plant in Japan, is pushing the country’s fisheries federation to allow more dumping of radioactive wastewater into the Pacific Ocean. GlobalPost reports that the electric utility wants to start mixing highly contaminated radioactive wastewater with fresh groundwater, which it would then release into the Pacific in diluted form.

TEPCO officials recently met with the head of the National Federation of Fisheries Cooperative Associations to discuss the controversial plan, which critics say will further harm oceanic wildlife and other critical ecosystem. Many local fisherman, for instance, are concerned that the perpetual release of radioactive wastewater off the eastern coast of Japan will contaminate the fish stock, ultimately harming their businesses.

Advocates of the proposal, on the other hand, claim that contamination levels will be below the government safety limit, and are thus not a threat. Since clean groundwater will be mixed with the radioactive wastewater, TEPCO and others allege that the dilution will be safe enough for release into the environment.

Currently, the facility houses hundreds of storage tanks that were set up following the March 11, 2011, disaster to mitigate radioactive waste that had leaked from the damaged reactor cores. Since that time, as the tanks in question have reached capacity, cleanup crews have been investigating other ways to handle all this waste, which is still leaking from the reactor buildings into basements, soils and, ultimately, groundwater.

“Ultimately you can’t keep putting contaminated waste in tanks, you’re going to have to decontaminate and release some of that water,” stated Ken Buesseler, a senior scientist at the Massachusetts-based Woods Hole Oceanographic Institution, during a panel discussion held at the Massachusetts Institute of Technology (MIT) back in the fall. “There’s a finite amount of real estate.”

Radiation cannot be diluted; it only gets dispersed, which means any level of dumping is hazardous

But there’s also a finite amount of natural resources on this planet, and releasing a continuous stream of radiation into one of its largest sources of life, the Pacific Ocean, could have disastrous outcomes. Radiation from Fukushima has already been detected up and down the U.S. West Coast, most recently in fish and seaweed caught off the coast of British Columbia in Canada.

As reported by GlobalNews.ca, scientists from Simon Fraser University recently published the results of tests that they conducted on pollock, hake, pink salmon and various other fish caught off the B.C. coast, which revealed the presence of radiation at low levels. Though they denied that any of this radiation is connected to Fukushima, ocean current patterns suggest otherwise.

“I’m sceptical when the government claims that the contamination isn’t getting here in the ocean currents — especially in light of the economic impact of finding contamination in our Pacific fish stocks,” wrote one GlobalNews.ca commenter. “What we really need is sampling by a trustworthy organization with no connection to the fishing industry.”

Radiation is not something to toy with, of course, as being exposed to or consuming it can cause long-term health problems and even death. Even small quantities of radionuclides from contaminated fish, for instance, can lodge themselves inside the body or in bodily organs where they continue to emit radiation over time, eventually leading to cancer and other conditions.

“Radiation does not ‘dilute’ in water,” adds another Globalnews.ca commenter. “It DISPERSES, covering more mass and distance.

“The only way this radiation, or more accurately RADIONUCLIDES, [goes] away is by decaying, and by decaying [it] releases radiation.”

Sources for this article include: